Killed by the Taliban 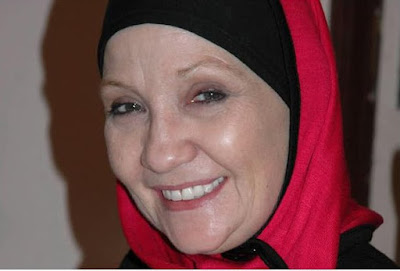 February 4, 2009. At his home in West Vancouver, Glen Cooper is fast sleep. The phone rings. “Hello?” It’s a bad connection from the other side of the world. “Hello?” It takes a few seconds, but then Cooper hears the broken English, the sharp hectoring voice. “Damn it,” he snarls, “it’s the middle of the night”—but the caller has launched into the familiar harangue: Where’s the money? Time is running out. Any news about prisoner releases from Guantánamo Bay? And, as always, the implicit threat: We have her…

“Her” is Beverley Giesbrecht, Cooper’s closest friend. If she herself were on the line, he would speak gently. But this is a Taliban goon who assumes Cooper can wave a magic wand. Cooper has heard it all before, the whole sick routine, but now it’s late and he’s hungover and mad. He slams the phone. A minute later it rings again. Now Cooper’s in a rage. He swears, crashes the receiver down, rips the cord out of the wall. For a few moments, he feels better.

Of course, in a day or two they call again. This time Cooper sticks to the talking points drafted by the RCMP task force handling the case: 1. She’s a devout Muslim. 2. She’s a friend of the Taliban. 3. Her journalism is making a difference in the West’s understanding of the jihadist insurgency. At all times, Cooper’s been told, refer to Bev by her Muslim name: Khadija Abdul Qahaar. Promise nothing, keep the lines of communication open, don’t talk politics, deflect any questions about a ransom. Maybe they’ll come to their senses, see that this poor, sick woman is more useful to them free than captive.

The rest of the story HERE
No comments: Links to this post

The shame of the bystanders 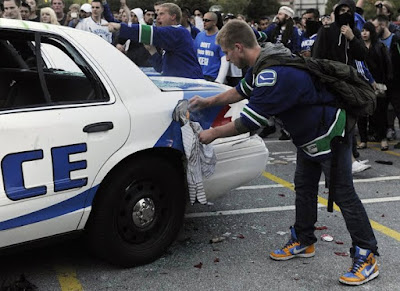 The Nathan Kotylaks of the world I can understand. It’s the bystanders I have trouble with.

Nathan is a 17-year-old Maple Ridge kid who tried to blow up a police car in Vancouver’s Stanley Cup riot, and blew up a promising life instead. Son of a prosperous family, a prospective future Olympian, he was caught on camera trying to set fire to the car in front of hundreds of witnesses.

It was a moment of epic stupidity. Was he intoxicated, stoned, momentarily unhinged? We don’t know. What we do know is that in the photo there are scores of eyewitnesses doing nothing. Many were egging him on. There’s also video of Nathan throwing fuel into the car, and shouting “Let’s do it! It’s gonna burn!” I listened hard, but I didn’t hear any admonishments from the mob. I heard cheering. Nobody took him aside, and warned him about the consequences of his actions. Instead, somebody snapped a picture, and went on his way.

(EDITOR'S NOTE: Photographer Jonathan McMorran is convinced that Kotylak was trying to set the vehicle alight. “I was five feet away when this man was lighting a shirt on fire and putting it in the gas tank. But I don’t think the shirt was far enough inside,” he said. “When the car actually caught fire six minutes later at 8:32 p.m., the blaze was started from inside the vehicle." He can’t say for certain that Kotylak was the one who succeeded in starting the blaze, because three or four people were making attempts inside the car. Source: Kent Spencer, Postmedia News)

The next morning the photograph went viral, and that’s when the backlash started. On Facebook, someone posted his home phone number and his address. A self-styled social media vigilante who calls himself Captain Vancouver launched a one-man “public shaming” campaign against Nathan and several other young men and women who were caught on camera. Said Capt. Vancouver about the photographs and the whirlwind of reaction: “It shall be chiseled into the hard stone of the Internet and last eternally.” (Why didn’t this Moses-like voice of retribution identify himself?)

Much of the commentary, from anonymous posters, was ugly. There were expressions of glee that he might be sodomized in prison. There was gloating that a “rich kid” would be taken down.

Nathan’s family, including his surgeon father, convinced him to give himself up to police. And he has made a public apology. If he is charged with a crime, as is likely, we won’t be able to use his name anymore because he is a juvenile. By then, of course, the social ostracism of Nathan and his family will have taken its cruel course, and court-enforced anonymity will be meaningless. The Kotylaks, worried about vigilantism, have already been forced to flee the family home.

Meanwhile, the national water polo team dropped him. Presumably, the University of Calgary, where he was due to begin studies next year on a partial scholarship, will also quietly withdraw the welcome mat. (The Facebook bounty hunters were urged to write to the dean of the U of C, and make sure Nathan wasn’t accepted.)

All this is predictable and, if Nathan is found guilty, probably justified. What he did is reprehensible and merits punishment.

But at the same time, I feel for the kid because he was an extension of a mob that will escape all sanctions. His co-conspirators will go untouched.

I’m a product of the ‘60s and I remember my William Burroughs: “There are no innocent bystanders.” And my Edmund Burke. “All that is necessary for evil to succeed is for good men to do nothing.”

In that downtown Vancouver riot, there were a few good men and women trying to stop the vandalism . . . But they were very few indeed, and some of them were beaten up. Mostly people watched. According to my ethical code, if you are a bystander, doing nothing, you’re an enabler. Eldridge Cleaver said it best: If you’re not part of the solution, you’re part of the problem. There is no neutral ground in a riot (journalists perhaps excepted.)

Looking at the video shot on the night of June 15, my partner Magi Bowyer directed my attention to the expressions on the faces of the people on the sidelines. The most common look was elation: they were getting a buzz from the noise and the flames and the police smokebombs and the prospect of looting. I didn’t see a lot of outrage; instead, it was the expression you see when children are creating mayhem without the risk of getting caught.

Experts who study the behavior of crowds talk about a phenomenon called “pluralistic ignorance”—the more bystanders there are, the less the likelihood of anyone intervening. We take our cues from those around us; if thousands are doing nothing, then passivity becomes the acceptable norm. It’s okay to blend into the mob and rationalize your indifference, because everybody is doing it. The mob crushes individualism. It’s like a fire that consumes all oxygen. Another term for this is “diffusion of responsibility”—if there are two witnesses to an outrage, they’ll probably step in. If there are two thousand, they’ll wait for somebody else to act. Altruism will diffuse into nothing. It’s also known as the Genovese syndrome, after the 1964 murder of Kitty Genovese in New York. Dozens heard her screams; no one even called the police

As someone has said, the opposite of love is not hate, it’s indifference. When all around you is indifference, it’s easy to flip a car or smash a plate glass window. You fall into the moral vacuum of the moment. The reptile brain takes over. Time is compressed into the black hole of the present. A present in which one's fecklessness carries no cost. (Plus it’s easy to forget that someone is taking your picture.)

The morning after the riot was warm and sunny. Hundreds of Vancouverites were out with brooms, cleaning up the mess and hauling off the trash. The mood for many, I suspect, was shame tinged with denial. This isn’t my city. This doesn’t happen in Vancouver. This must be the work of a small cabal of anarchists and crazies, troublemakers. Everybody pointed fingers; the social media “outed” the culprits like Nathan, vilified them, condemned them, published the pictures they’d taken with their iPhones. Thousands scribbled their pieties on the Wall of Forgiveness.

But then came the real shame of June 15: the ugly vigilantism that followed the rioting, the scapegoating. But the scapegoaters forget it was all of us out there. We, the vast majority, stood by. The intensity of the morning-after fury was, I believe, in direct proportion to the deep-seated guilt we all felt for doing nothing. Because if we were in downtown Vancouver on that evening, we knew, deep down, that our silence was our approbation; our turning away enabled the madness.

Postscript: There's some suggestion that the way we play hockey, and promote it, and indulge its essential violence, was a contributing factor to the violence on the street on June 15. See Jeffrey Dvorkin's excellent essay. I'm not sure about that. But I do have some reservations about the media coverage of the final series between the Canucks and the Bruins. At least locally, it pushed almost everything else off the news agenda. The series was the ONLY story that mattered. We took a straightforward sports event and turned it into something all-consuming. We made it a contest that would define us. We would be the best. We put up giant screens on the streets to concentrate the tribal emotions we whipped up. Politicians appeared on camera in team jerseys, and pandered to the public mood. Hey, this matters, was the message! Then, when the team "failed" and the emotion turned sour, we were shocked.

Make Them Pay, screamed the front page of the Vancouver Province. But it was too late. We have already paid. But have we learned?
1 comment: Links to this post