Notes from the breadline . . . 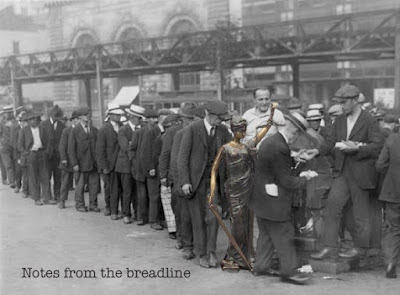 OK, so I'm not on the breadline. Yet. But I wanted to get your attention. I don't stand in line for free bread. I still buy my peasant bread for $12 a loaf from Floran, my Transylvanian baker in Kitsilano. But I ration myself to one slice a day. Things are getting tough. I'm into my sixth month of unemployment. My allotment of UI cheques runs out next month. I'm down to my last 8K in savings. Yesterday, for the first time ever, I bought a lottery ticket. I lost. I wake up every morning at six in a funk. How many days have I got left before the entire superstructure of my life comes crashing down? Okay, that's melodramatic. I'm in a semi-dream state, and in that state, everything is ragged. But the dread of joblessness is beginning to consume me. As Slappy White said: "The trouble with unemployment is that the minute you wake up in the morning you're on the job."

First, a little bit about myself. I'm 60 and in great health. I'm presentable. I have a resume to die for. Check it out. I have hair, I look okay in a suit, and I know which fork to use at a dinner table. There are a dozen things I can do well, for money (and benefits.) But I'm not doing them. What's that all about? My savings are running out and my credit cards are maxed and that Sour Hour between six and seven in the morning is getting worse. The walls are closing in. I'm getting defensive. (Notice how I emphasized my "great" health after I told you I'm 60.)

Have another look at the picture above. I believe that's Justice in the breadline. Justice is going begging. It's the damned unfairness of it all. I feel myself shrinking. "Unemployment," said Mason Cooley, "diminishes people." I put on my ego in the morning and it doesn't fit anymore. The other day I was helping my son Gabriel mow a neighbor's lawn--he's trying to start a gardening business--and I thought: "Hey, maybe I could do this, for eight bucks an hour." From Visiting Professor to the common vetch (a garden weed) in five years; how the worm has turned.

So I went to Poynter Online, and read Colleen's Help Column. And one of her many pieces of Advice to the Jobless is "Keep a Journal." It's a way of staying in touch with yourself, or reminding yourself that you're moving ahead. Also, it's a way of taking those daily quantum units of job-search frustration, reducing them to a few simple words and then dismissing them as insignificant. To be honest, there's also a bit of petulance at work there: Look, cruel world, what you have reduced me to!

It's also something to do. It's Defoe's Plague Diary. Notes of a Fan. Chronicles of Wasted Time.

So here's my journal. I'll try to keep it simple. No chewing of the furniture, no eruptions of hurt or rage. You'll have to read the sentiment between the lines. And you'll know that when it ends (if it ends?) I'll have found work and my Seldon Crisis will be over. (Seldon Crisis: See Isaac Asimov.)

Start day by checking email. A woman with information about my proposed documentary (hereafter referred to as PD) has contacted me on Facebook. She wants more detail about my project. I tell her we should communicate by email, because Facebook is "too public." (I've been working on my PD for three months--more about that later.)

I spend five minutes emailing the head of the media department at a local university. Do they have any openings for media trainers, or teachers for that matter? I go through the daily Media Job Search Canada listings. Example: "Senior Network Analyst, CBC Montreal" I do a quick scan of Jeff Gaulin's Jobsite. It's a desert out there. I have breakfast (single slice of peasant bread, buttered) and read about a journalist who wrote a book, made some money, and decided to travel the US with a pool hustler for a year, looking for action.

Yesterday, on the advice of a newspaper buddy, I wrote a short note to a high-profile PR company, telling them a bit about me, and asking about media training jobs. I'll be happy to get so much as an acknowledgement of receipt. You have to understand that I've been doing this daily, for months, and only one in 12 prospective employers even go to the effort of telling you they're received your application. (Here you'll have to read between the lines to sample my emotion.)

While bottom-feeding, came across an online men's magazine called JimberJaw that's looking for hip, edgy, sexy articles on such soul-catching subjects as Where to Pick up Girls, Where to Find a Great Cigar, and New Gadgets the New Male Can't Do Without. (JimberJaw is a caveman who's brought to life after being frozen for 50,000 years, and the publication admires his "simple thinking"--all he apparently wants is a Bud, a broad and a gadget) I enquire about such things as payment, kill fee, expenses, etc. The answer comes quickly "$25 per article--300 words. No kill fee. Payment only for articles accepted." I'm surprised they don't offer payment in the form of flints, or a jawbone . . . Gardening is sounding like more of an option every day.

Also inquired about a British-based website that specializes in "wind power and other alternative energy" stories, and is looking for somebody, anywhere, a self-starter, to work for 2 days a week. They promise "competitive" wages. I sent them my CV and my day rate. Haha.

Maybe I should just roll with it. John Patrick Shanley, speaking at a commencement ceremony, says that you just need to tell everybody that you're a poet. Copy Walt Whitman. "Whitman never worked a day in his life." Instead of sweating in the unemployment line, sit under a tree and compose a verse. Presto: You are living gainfully. You are adding to the fluency and harmony of the cosmos. As someone else said, reality is only a matter of how you language it.

Month and a half since the last posting, and little change. No movement on the documentary, no interest in Alkali Lake (unless you count $75 from The Tyee as interest), and little progress in the Sydney Banks retrospective. His "stakeholders" want a budget for a legacy video, but I'm getting silence from Bill. Driving me up the wall. Meanwhile, I wait for the Mary Aikins at Readers Digest to respond to a pitch on three stories: Jade (a pickup from BC Business), Alkali and Banks. But it's like glaciers moving. Nobody responds to anything. My rage is building. Magi thinks I'm falling apart--her theory is I'm looking for "no parking." I have to open up and allow success to come in! Meanwhile, the vault is almost empty. And I've emailed The Chelsea tenants to sound them out on buying the condo . . .
1 comment: Links to this post