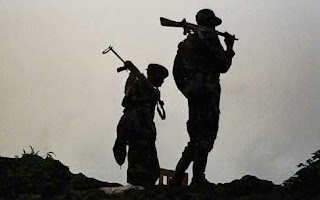 Gerin and Martinez were witnesses to (and almost consumed in) a little known episode of the Rwandan genocide. The episode raises serious questions about the behavior of the Rwandan Patriotic Front, in its campaign to crush the Hutu regime and end the 1994 genocide. And it begs the larger question: When does military action to stop genocide, become genocide itself? And why has no tribunal ever formally investigated the actions of the army that “won” the 1994 war?

(You can find my documentary Rwanda: Out of the Darkness here.)

Verlinden, a reputable Dutch-speaking journalist and writer, produced a documentary based on the couple’s testimony, called “The Killing Fields.” It drew considerable attention in Europe, but almost none in Africa, or North America . One can only guess at the reason: Perhaps allegations of atrocities by the “good guys” in the conflict--the RPF--only serve to confuse (or render overly complex) the accepted narrative of the events of 1994.

In any case, Verlinden summarized the story, and his researches around the story, in a statement, dated September 28, 2004, which he offered to the International Tribunal in Arusha. He said he was acting as an “intermediary and spokesperson” for the couple, who had left Rwanda, and were no longer willing to talk about the events they witnessed in 1994, for “very personal reasons.” One can only guess what those reasons are.

Here are the main elements of their story.

One week after the shooting down of Hutu President Habyarimana’s airplane in Kigali--the event that launched the genocide--Gerin and Martinez found themselves with 1500 to 2000 refugees at Mpanga Ranch. “They were counting on the two whites to protect them.” Verlinden writes. “There were no Rwandan soldiers (in the vicinity) and no Interahamwe. "

Around the 22nd or 23rd of April, they heard heavy gunfire a few kilometres away. Three days later a small group of soldiers arrived at the ranch. They spoke English and Swahili. Gerin described them as soldiers, but they were not in uniform. He concluded they were Ugandan. They arrested the couple, and their Rwandan helper, by the name of Innocent Katete. A short time later, one of the group fired three bullets into Katete, and ordered that no one should help the young man, because he was a “dying dog.”

The rebels (they were clearly members of Kagame’s army, advancing from bases in Uganda) took the couple into custody and brought them along on the route to the town of Mulindi. “There were barricades all over the road,” Verlinden writes, “manned by English-speakers.”

In Mulindi, Gerin and Martinez saw “a very large number of bodies. The corpses were obviously fresh.” It was April 26. The couple noticed that a lot of the armed militia were children. Later that day, the column decided to return to Mpanga. Martinez was with them when they stopped at the home of a man getting ready for bed, without interrogating him, cut off his head. They told her he was a traitor and a member of the Interahamwe.

Back at the ranch, Martinez says the leader of the rebel group, whom she named as George Kelinde, gave instructions to the rebel group that they should “wipe out everyone who moved.” No one, he said in Swahili, should be left alive. “She immediately alerted her husband,” Verlinden writes, “but for reasons of personal security, they were not able to intervene.”

Back again in the town of Mulindi “there were many corpses.” Verlinden quotes Gerin as saying that “the blood was still flowing, that these were people who had just been killed.” They numbered in the hundreds. The odor of death was “overwhelming.”

“He (Gerin) told of a child who was crying. A commander ordered a soldier to ‘make it keep quiet.’ Immediately after, the child was killed by a bullet.”

The couple pleaded with their captors to let them go. On the night of April 27, the militia agreed to take them to Kibungo.

“Along the road Gerin and Martinez saw with their own eyes how child-soldiers killed with machetes those whom they found on the roads (mainly the elderly, woman and children.) The rebels accompanying the couple told them, speaking about the Hutus: ‘We’ll win the war with their uniforms and their methods; we’ll do the same thing (as they do)’.

“On the main road, on the way to Kinbungo, Mr. Gerin drove through the blood of the victims who had just been killed. He said freshly killed bodies could be found all along the road. He insisted they were fresh corpses, because the blood was still flowing . . . The next day, the corpses had been taken away, and placed in common graves along the road.

“In Kibungo, again, a large number of fresh cadavers. The couple heard shooting everywhere during the night of the 27th and 28th. They saw no soldiers who spoke anything other than English and/or Swahili, and according to them, all the Interahamwe had left the area and all the barricades were occupied by new soldiers, and they could only conclude that these soldiers were responsible for a large number of the killings. The killers were not uniformed, but were well armed.

Eventually, the couple were “rescued” by a Reuters news team in the area, and taken to the Tanzania border, and safety.

Concludes Verlinden:
“From a journalistic point of view, this testimony is very important, and probably also from the point of view of justice and of history. Marcel Gerin and Gloria Martinez did not stand to gain anything from these declarations—quite the contrary. For them this is a fight against the general opinion of the Rwandan tragedy. Accordingly they, and more and more academics and journalists, are beginning to better understand that what we know today (about the full story of the Rwandan genocide) is incomplete.

“Based on my researches of 1998-99 into this story and other researches on other aspects of the Rwandan story, I dare to conclude that we do not yet know all those responsible for what happened in 1994. If my testimony on this story can contribute to the completion of the dossier, I am prepared to give it.”

This excerpt is taken from an article which can be found in its entirety at http://www.anzacday.org.au/history/peacekeeping/anecdotes/kibeho.html

It is an account of what 32 members of the Australian Defence Force Medical Support Force witnessed at the Kibeho displaced persons' camp, a refuge for Rwandan Hutus, in April 1995. At the time the camp was surrounded by two battalions of Tutsi troops from the Rwandan Patriotic Army (RPA), formerly the RPF, which regarded Kibeho, five hours west of the capital city Kigali, as a sanctuary for Hutu perpetrators of the 1994 genocide.

"On one side of the road, my half-section covered the hospital that contained fifteen corpses. In the hospital courtyard we found another hundred or so dead people. A large number of these were mothers who had been killed with their babies still strapped to their backs. We freed all the babies we could see. We saw dozens of children just sitting amidst piles of rubbish, some crouched next to dead bodies. The courtyard was littered with debris and, as I waded through the rubbish, it would move to expose a baby who had been crushed to death. I counted twenty crushed babies, but I could not turn over every piece of rubbish.

"The Zambians were collecting the lost children and placing them together for the agencies to collect. Along the stretch of road near the documentation point, there were another 200 bodies lined up for burial. The other counting party had seen many more dead than we had. There were survivors too. On his return to camp, Jon saw a baby who was only a few days old lying in a puddle of mud. He was still alive. Jon picked the baby up and gave him to the Zambians. At the end of our grisly count, the total number recorded by the two half-sections was approximately 4000 dead and 650 wounded. . . .

" . . . At 2.00 p.m. that day, we were rotated out of the camp. We felt sick with resentment at leaving the job incomplete, but there was very little that we could have done for those people. We estimated that at least 4000 people had been killed over that weekend. While there was little that we could have done to stop the killings, I believe that, if Australians had not been there as witnesses to the massacre, the RPA would have killed every single person in the camp."
13 comments: Links to this post