Does he really need to be here? 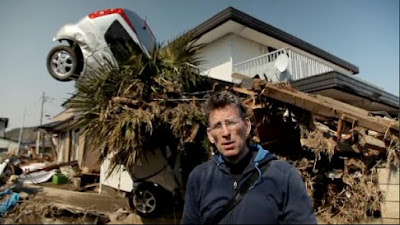 Trauma wasn’t a big issue for journalists 32 years ago when Unit 2 of the Three Mile Island nuclear facility in Pennsylvania suffered a partial core meltdown. As I remember it, we were “spooked” by the fact that if we were accidentally radiated, we’d never know it until our hair started to fall out weeks later.

That produced its share of gallows humor at the time. As did my anxiety when my flight out of Harrisburg back to Washington took me over a TMI cooling tower just as it belched a huge cloud of steam. Was it a radioactive cloud? What was the pilot thinking? Was I doomed?

I remember worrying what effect this flyover might have on my ability to produce children, but the subsequent arrival of Patrick (1981) and Ariel (1987) put those fears to rest.

They were heady, stupid days. Most of the journalists who converged on Dauphin County to cover that iconic nuclear accident knew almost nothing about reactors, relief valves, or radiation. We were ignoramuses eager to produce some disaster porn. Science was not our strong point. The most common question in the media scrums was “What’s a millirem?” (Answer: It’s one-hundredth of a Sievert.) We’d all seen The China Syndrome, so we were all waiting for the molten uranium to burn its way through the earth’s crust and initiate the Countdown to Armageddon. Meanwhile, we listened to the lies and evasions of the plant operators, and wrote the obfuscatory stories that created more confusion than clarity for our readers.

I remember one day, desperate for fresh copy, a few us drove out to farm country to see the cows. We’d been told that cows react to unnatural events by turning away from the source of trouble. So we found a farmer’s field where most (but not all) of the cows were facing away from the TMI cooling towers. That was enough for a provocative photograph and a few chilling paragraphs with a catchy headline: “What do the cows know that we don’t?”

Of course none of this is funny today, as we watch the unfolding of the Japanese triple-threat: quake followed by tsunami followed by reactor crises. Reporters are better versed today in science and technology, as well as how to act in dangerous places. But still, some serious questions remain.

The Pack Moves In

Like, what are all those journalists doing there in the first place? Are they really necessary, or do they just get in the way? What are they telling us that we don’t already know? The stampede of foreign journalists into Japan in the days after the tsunami baffled some correspondents already there.

Dan Chung, a video-journalist for The Guardian, was in Japan’s disaster zone 36 hours after the 8.9 earthquake struck. He left during the first radiation scare. “We were the first wave in and we were getting the hell out of Dodge. And the second wave (of foreign media) were just coming in. It was strange. I guess they were there to cover the meltdown.” (A podcast of Chung’s experiences can be found here.)

Of course, if there were a meltdown, nobody would get within 100 km of the nuclear plant at Fukushima. Even as it was, there was little or no access to the main disaster area, so most of the second wave of visiting journos never even left Tokyo, with its 24-hour communication, abundant food and accommodation, and best of all, no threat of radiation.

Even for those intrepid one-man crews like Chung who got into the disaster zones early, news-gathering was nightmarishly difficult and ultimately without much point. Almost all of Chung’s 20-hour working day was consumed by logistics—fuel, food, power and finding Internet connections—which left barely two or three hours for real work.

And then, most of the still pictures and video he shot were superfluous. Chung says he “couldn’t compete” with Japanese crews on the ground and in helicopters, or with the incredible Japanese amateur video that was already being transmitted around the world.

Finally, there was the simple problem of communication. Chung couldn’t speak Japanese, and even with a translator, survivors didn’t want to talk to him.

“I kept asking myself, what the hell are you doing, and how do you do it differently?”

Those questions are mostly rhetorical. They answer themselves. In his heart, Chung knows very well why he was there, spending thousands of dollars of his boss’ money on a noble but unrewarding exercise. He was in Japan because The Guardian wanted him to be there so they could say they had somebody on the ground. (Radio France were notable for their decision to put safety ahead of ego, and pull most of their journalists out of Japan when the reactors started leaking.)

Disaster coverage on this scale is all ego for large news organizations. It’s ego on steroids. Stories like Japan offer almost no opportunity for original, enterprise reporting. They’re a showcase for your marquee correspondents, who are parachuted in and whose job it is to put a face (or a byline) on an already-familiar story. It’s a practice called “establishing presence”--like planting one's flag at the North Pole: Today we are here (and tomorrow we’ll be gone.) The pictures these correspondents are fronting from Tokyo are the same pictures, and the same information, that have been spinning through the CNN, BBC and Al-Jazeera news cycle for hours.

Just as Operation Desert Storm in Kuwait, 1990, was covered out of Washington, so too Japan, 2011, could have been covered perfectly well out of Vancouver or Toronto. All the images and human drama and analysis and graphics and voice clips are flowing down the pipeline, 24 hours a day, and all of them can be perfectly packaged at home. (Disclosure: I tried to cover Desert Storm for the CBC from a hotel in Dhahran, Saudi Arabia, but ended up spending much of my time in a bomb shelter with a gas mask on.)

“We owned the story yesterday,” was how the senior executive of one Canadian network greeted the first-day coverage of the disaster. In fact, nobody on this side of the Pacific “owned” it. It wasn’t owned. At best, it was creatively appropriated, re-packaged and disseminated. The real owners of the story are the people who lived and died through the disaster, who used the social media to deliver the images, and who continue to risk their lives in the rubble and the reactors to mitigate its effects. Plus those brave Japanese journalists who got the first pictures out on March 12.

Maybe the time has come for new, lean, fast-reaction kind of disaster journalism. Small, highly-mobile, self-contained units of intrepid people like Dan Chung who are able to access a disaster area within hours, and send back information, pictures and audio to a data pool that everyone can access. We have to accept the ego-deflating fact that there are few scoops in catastrophes. We have to give up the idea that we can “own” stories of chaos.

This kind of mindset is not likely to be embraced soon by our corporatised, celebretised media, so I guess we will continue sending journalists into trouble areas, and hope they muddle their way through with the minimum of risk and trauma.

If so, they should all read a guide prepared by Yoichi Shimatsu, a former editor with the Japan Times Weekly. His guide was commissioned by the Dart Centre for Journalism and Trauma, and it has some good crisp ideas on how to gird yourself for life in a nuclear disaster zone. He also tells you what to pack: Things like small units of currency, the right camera phone, travel insurance (for that emergency helicopter ride to the hospital) and plenty of throwaway raincoats and face masks.

My favorite piece of advice is: Don’t be afraid to act like a “horse’s arse” at official press conferences. “The press handlers play dirty, and never forget it,” Shimatsu advises. So ask the tough questions and expose the denials and excuses.

In other words, if you absolutely have to be there, then at least find a way to make a difference.
No comments: Links to this post