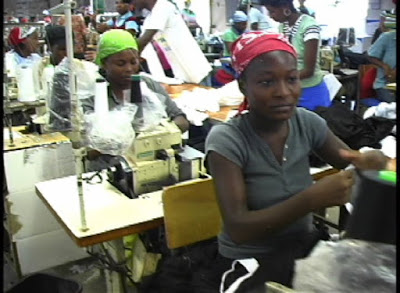 Twenty-five years ago, Haiti produced almost all of the world’s baseballs. Women would stand in the factories all day, hand-stitching the cowhide, 108 stitches per ball. It cost about nine cents to produce a baseball, and one woman could stitch three dozen per day.

Few if any of the stitchers ever saw a baseball game, which is alien to Haiti. Even if they wanted to they could never afford a ticket. They earned $3.10 a day. It wasn’t much, but what do you expect in a tropical dictatorship? Haiti at the time was run by a ruthless kleptocrat called Baby Doc Duvalier.

Times have changed. Haiti is a full-fledged democracy today, and Haitians don’t make baseballs anymore. They make T-shirts. The sweatshops are a little cooler and cleaner; the work is more mechanized, and the assembly lines are a lot more productive. But one thing remains the same as it was in the bad old days of Duvalier: the men and women on the line still earn about $3 a day or less—barely enough to buy a bottle of milk and a loaf of bread in the supermarket.

Considering inflation, the garment workers are actually worse off than they were 25 years ago. Today, breakfast, lunch and public transport consume most of what the average T-shirt maker earns in a day. During a recent visit to Haiti, I met a woman who’s been on the assembly line for four years. Her name is Paulette Dorval, and she works 10 hours a day, six days a week. She has four children, but she’s had to send three of them away to live with her mother. Every two weeks, she gets a pay envelope with 840 Haitian gourdes—that’s 22 dollars and 63 cents Canadian. That’s 18 cents an hour. On the day I met her, Paulette said she wasn’t having any dinner. She’d spent the last few pennies on the bus ride home from work.

Koreans own the factory she works in, but nationality has nothing to do with the exploitation of garment workers in Haiti. The French owner of a t-shirt factory in Port au Prince threatened to shut his factory down, and lay off hundreds of workers, if the minimum wage was raised to $5 a day. He meant it. And an executive of a Montreal company, Gildan Activewear, that buys a lot of its leisure wear in Haiti justified the country’s pay rates by saying you have to look at the question of Haiti’s minimum wage in an “holistic” way. That’s the word she used. Holistic.

Gildan says everything costs more in Haiti: electricity, transportation, fuel, building expenses. There’s also the cost of insecurity and rampant corruption. The argument is that if manufacturers had to pay their workers a better wage, a living wage, say $5 a day, they simply couldn’t compete. In other words, it comes down to a choice between profitability, and Paulette Dorval eating dinner every day. There is no middle ground.

The ruling classes in Haiti aren’t happy about the fact that they have to pay beggars’ wages to keep the factories open. I put the question to Rene Preval, Haiti’s president, and he told me that his government has no control over how much Haitians should be paid. He said major corporations like The Gap and Levi’s make those decisions. They determine the contracts. The people who market t-shirts and sweatshirts in North America are notoriously sensitive to price fluctuations . . . Preval said that when the Dominican Republic raised its minimum wage for garment workers to $5 a day, it lost 110,000 jobs. In one year. That kind of setback would be a catastrophe for Haiti, which has had enough grief in recent years due to horrible weather, kidnappings, corruption, and a weak near-bankrupt government. As a result, Preval recently vetoed a law that would have paid garment workers 200 gourdes a day ($5.32 CDN.)

Indeed, the so-called friends of Haiti, like Bill Clinton, and the secretary-general of the United Nations, are on record as saying that what Haiti needs is MORE sweatshop jobs—tens of thousands more—to lift the economic base because, after all, two or three dollars a day is better than nothing.

I’m not an economist, but having spent some time with Paulette Dorval, I wonder if that’s true. I mean, what has her job given her? She’s hungry, she can’t afford to care for her family, she can’t send her children to school, her job affords her little or no dignity, and she has almost no chance for promotion because she has little self-confidence or managerial skills. She can’t join a union. There is none. Nor does she get any employee benefits. Paulette is trapped in an economic model that hasn’t changed in a quarter century.

If we stopped buying those t-shirts, if Paulette lost her ill-paying job, she would have to fall back on Haiti’s so-called “informal” or street economy. That’s no solution either. But there’s a third option: using some of those hundreds of millions in foreign aid that Haiti gets to create much-needed jobs in agriculture, in tourism, or in more modern manufacturing that pays a decent wage. That might be the start of a new economic model, one in which Paulette could find an income, dignity, and the means to raise a family. Sadly, that’s not likely to happen anytime soon.

I interviewed the director-general of Haiti’s biggest industrial park, Jean Kesner Delmas, and I asked him if he wasn’t a bit ashamed as a Haitian citizen that 20,000 of his countrymen and women were earning less than a living wage. Squirming in his seat, Delmas finally admitted that it was a disgrace. He said, yes, maybe they were being exploited, and that the bosses should understand that a happy worker is a better worker. But then he stopped, and reflected on his words, and begged me not to use any quotes that would get him in trouble with his superiors.

Like the Gildan executive, Delmas asked me to take the wider view, the holistic view. But Paulette Dorval cannot think “holistically” about her situation because her needs are all narrow and immediate and short-term: food, medicine, a new dress, getting her family back together.

And there is no escape for people like her. If you’re a member of Haiti’s small middle class, with an education, there’s always the chance of emigration and finding a job in the US or Canada, and becoming part of Haiti’s Brain Drain. That’s precisely what four out every five Haitian university graduates do. They achieve, and they leave. But Paulette has no delusions about even making it to the middle-class. The best she can hope for is to hold on to her wretched job and maybe, at some point, to benefit in some small way from the hundreds of millions of dollars in foreign aid that flow into Haiti from the US, Canada and Europe.

And that, finally, is the enigma of Haiti. It’s an economic basket case that absorbs vast amounts of foreign aid, the object of all our best intentions, and yet nothing substantial ever changes.

I’ve been visiting Haiti regularly since the late 1980s, and the one recurring theme is “stasis.” The poor remain poor. The roads are always bad. There are never enough schools, or hospital beds. The jails are always overcrowded. And every heavy rainfall brings a flood. Environmentally, Haiti is fast becoming a wasteland. It exists under virtual trusteeship—policed by 10,000 United Nations peacekeeping troops, kept on life support by 10,000 non-government organizations (NGOs) who comprise, far and away, Haiti’s biggest industry. And then there are a dozen or so bourgeois families who drive late-model SUVs, run the factories, and effectively keep Haiti’s economy in a medieval time warp.

All that human activity, all those dollars, and the best idea for the future involves creating more $3-a-day sewing-machine jobs! Paulette Dorval, and Haitians like her, deserve bigger dreams than that.


Claude Adams is a veteran freelance journalist and videographer who has reported extensively from Haiti and other developing countries.

Thank you, Claude Adams, for a wonderful insight into the dilemmas and harsh choices facing Haitians as they try to look to the future. Let us hope that some of Canada's negligent media lift their eyes and start informing Canadians of the tragedy that their government has helped create in Haiti.

Interesting piece, indeed. My first visit to Haiti was as a teenager in 1969. It took me sometime to appreciate the complexities of the country and its people. Solutions do not come easy. However, I was fortunate enough to be the daughter of a man who believed that if Haiti was to survive, it must produce. Despite the fact that agricultural production did not serve the interest of international donors in the early eighties, he persevered. It is to the credit of those early farmers who valued their right to self determination and forged agricultural cooperatives enabling them to be able to provide for their families. It takes courage to say "no" to the kind of aid that ultimately diminishes human dignity. This courage is alive in Haiti and is about to demand its due.

They say it's a cold world said...

This really does a great job of summing up the misery of the maquiladora system. So often these "jobs" are just slavery by another name. If you are a slave and you are fed enough to keep you able to work are you better or worse off than someone who is paid only enough to just manage transport costs to the job, plus a meager meal or two a day?

This is all about making manufacturers and designer labels accountable and not letting them hide behind layers of subcontractors in murky free trade export zones.

I have gone through this blog. Ifound it very interesting and helpful.
nowadays I am completing my online degree course from home. So this blog is
really doing great for me.

Jessie, if you have a moment, tell me more about what you are studying . . .

Great piece, Claude! Now all we have to do is figure out how to stop the exploitation without hurhurting the exploited in the process.